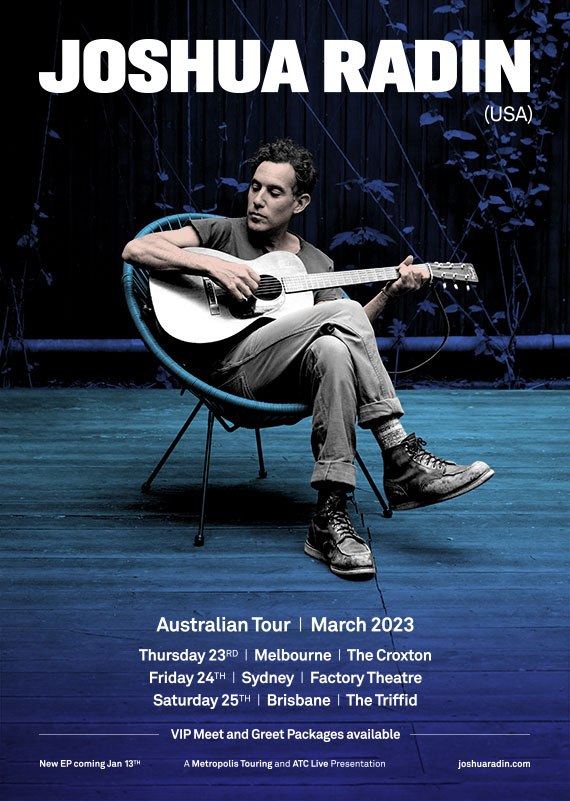 Joshua Radin emerged in 2004 as an empathetic, engaging, and often enthralling troubadour. He’s tallied north of 1 billion streams, moved 1 million-plus albums worldwide. His music has appeared in over 200 films, television series, and commercials. He has had multiple showstopping appearances on Ellen (who also enlisted him to perform at her wedding) and Today Show, and performances on The Tonight Show, Jimmy Kimmel LIVE! and Conan. He’s played to sold out crowds around the globe and shared the stage with Ed Sheeran, Sara Bareilles, Ingrid Michaelson, Sheryl Crow, Tori Amos and more.

Following the release of his 2021 acclaimed album The Ghost and The Wall, the prolific Joshua left his material existence in the rearview, grabbed a backpack, packed his guitar, picked up a pen and a pad, hit the road in search of new stories to tell. Those stories comprise though the world will tell me so, part 1, the first of a pair of forthcoming EPs.

Joshua is in his happy place performing and telling stories. Join him as he delights new and old fans alike with a setlist of favourites including Winter, I’d Rather Be With You, Only You, Beautiful Day, My My Love and Here Right Now to name a few

This is a rare opportunity to see one of today’s most celebrated singer-songwriters in an intimate setting.

Get your tickets now and experience the magic of live music!