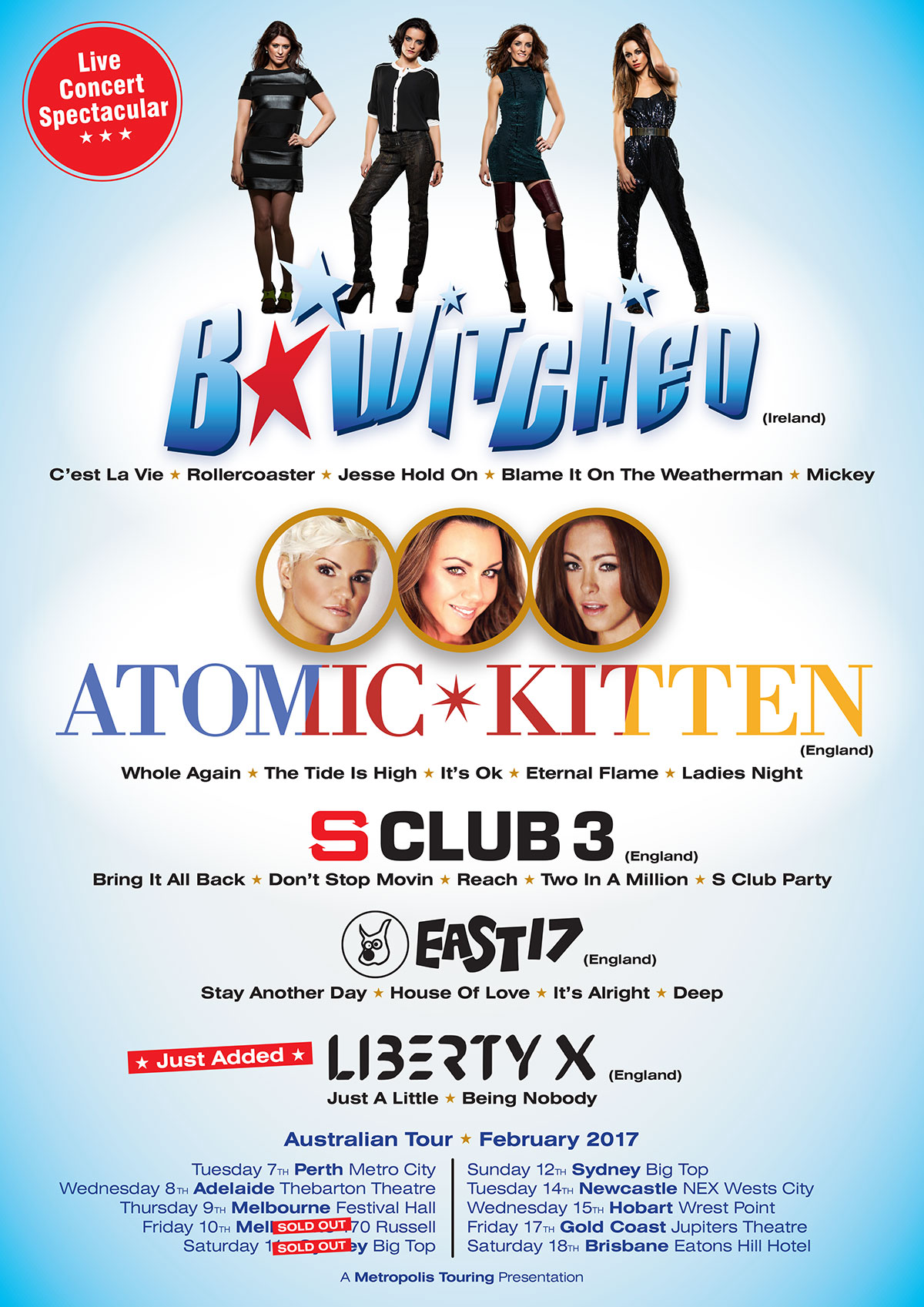 There’s nothing better than seeing your favourite artist live in concert.  Except when four of your favourites team up as a package… then it’s guaranteed to be the Best Concert Ever.

Irelands biggest pop export B*WITCHED head down under in February 2017 for a mindblowing reunion tour like no other. Off the back of a Sold Out UK Arena tour that left fans begging for more, the Dublin quartet bring with them a string Australian Top 10 hits including C’est La Vie, Rollercoaster as well as Jessie Hold On, To You I Belong, Blame It On The Weatherman plus More!. B*WITCHED have sold 3 million records worldwide

Joining B*WITCHED are English all girl group ATOMIC KITTEN. The girls first entered the Australian charts in 2001 with their #2 smash hit Whole Again. They followed up Whole Again with a serious of poptastic singles including The Tide is High which reached #3 on the Australian Charts, Be With You gave them another Australian Top 10 and Right Now, Eternal Flame, It’s OK, Ladies Night were all Top 40 hits here. ATOMIC KITTEN have sold 10 million records worldwide!

Joining B*WITCHED and ATOMIC KITTEN on the big pop nostalgia fest will be S CLUB 3 (Jo O’Meara, Tina Barrett and Bradley McIntosh). S CLUB 3 will unleash a time capsule of euphoria as they perform all their massive hits Bring It All Back, Don’t Stop Movin, Reach, Two in a Million and of course S Club Party.

Take That’s biggest rivals, English boyband EAST 17 bring with them an arsenal of hits including Australian chart topper It’s Alright plus Deep, House Of Love, Stay Another Day & West End Girls. A Perfect start to get the night pumping with their unique dance / pop blend. EAST 17 have sold a staggering 18 million records worldwide!

B*WITCHED, ATOMIC KITTEN, S CLUB 3 and EAST 17 all together on One Stage for One Night Only is guaranteed to bring back some awesome memories.

There really ain't no party like an S Club Party

East 17 are quite easily the best pop ever. Forget, the Backstreet boys, Britney or any of that nonsense