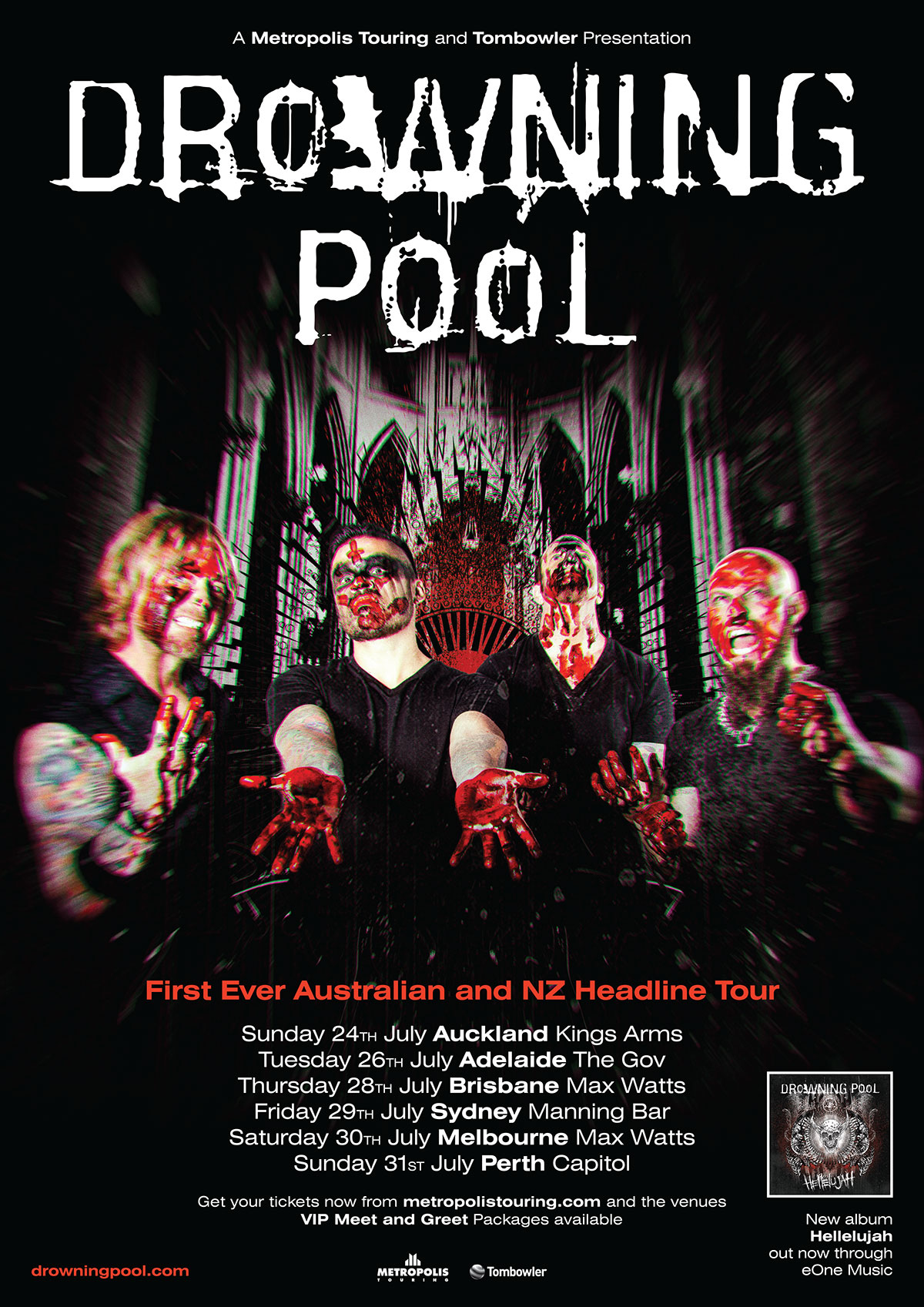 Metropolis Touring and Tombowler are proud to present Texan powerhouse quartet, Drowning Pool this July. After a Fourteen year absence Drowning Pool have now set their sights on Australian soil for their first ever headline tour plus a special one off New Zealand show.

“As soon as they played the opening licks, heads started banging, and the tide came in. A sea of people pushed forward, smashing tits, guts and faces against the metal barricade, and booted shoes of crowd-surfers assailed the heads of those unwary of what was going on behind them.” – Rock On Request

Big sonic slabs of muscular power with a taste of the dark melodies of post-grunge remain Drowning Pool’s stock and trade. Their music is an unapologetic celebration of life’s joy and pain, able to swiftly maneuver between defiant declarations of resistance. Each distinctive era of the band’s history is represented onstage, where the band bashes through an arsenal of anthems all delivered with precision strength.

Drowning Pool burst onto the hard rock scene 15 years ago with their platinum selling debut album ‘Sinner’ and remain to be relevant. Heading to Australia to support their critically acclaimed new material ‘Hellelujah’ this is the album their diehard fans demanded and the aggressive heavy rock world at large deserved. Reenergized with the addition of fierce front man Jasen Moreno, proudly amongst the soul of Drowning Pool original members CJ Pierce, Stevie Benton and Mike Luce; this is a rebranded monster ready with teeth bared heading straight for the jugular!

Australian / NZ fans have waited impatiently since their Big Day Out appearance in 2002 to witness crowd favorites such as ‘Sinner’, ‘Step Up’, ‘Tear Away’, ‘Pity’ and floor filler smash hit ‘Bodies’, this July fans will be treated to a hard hitting headline run. The Lone Star State conquerors deliver a heavy batch of hell raising anthems, each burning with fiery adrenaline destined to ignite crowds into impassioned sing-alongs.

“I cannot emphasize enough how much passion and energy they had on stage. Vocalist Jasen Moreno screamed his heart out. Bassist Stevie Benton never stopped moving and drummer Mike Luce kept the pace despite having his throne malfunction, tossing him off of the back of the riser and into the wall behind him” – Knac

Get your bodies to the floor!

The best thing about DROWNING POOL was just how energetic and passionate every member of the band is. It's obvious why they do what they do. Everything from CJ's aerial jumps and crazy faces, to Jason getting as close as possible to the crowd, sometimes even letting them sing into his mic. This was one of the best shows I have seen, definitely catch them on tour!

The crowd chanting along, with their fists in the air and the energy was electric throughout the show. Plus, Tear Away, Bodies.... all would've made Dave (Williams) proud

The crowd go wild and, well, the bodies hit the floor. It is quite a sight to see the mess of hair and flesh flail around..... A quite extraordinary live moment