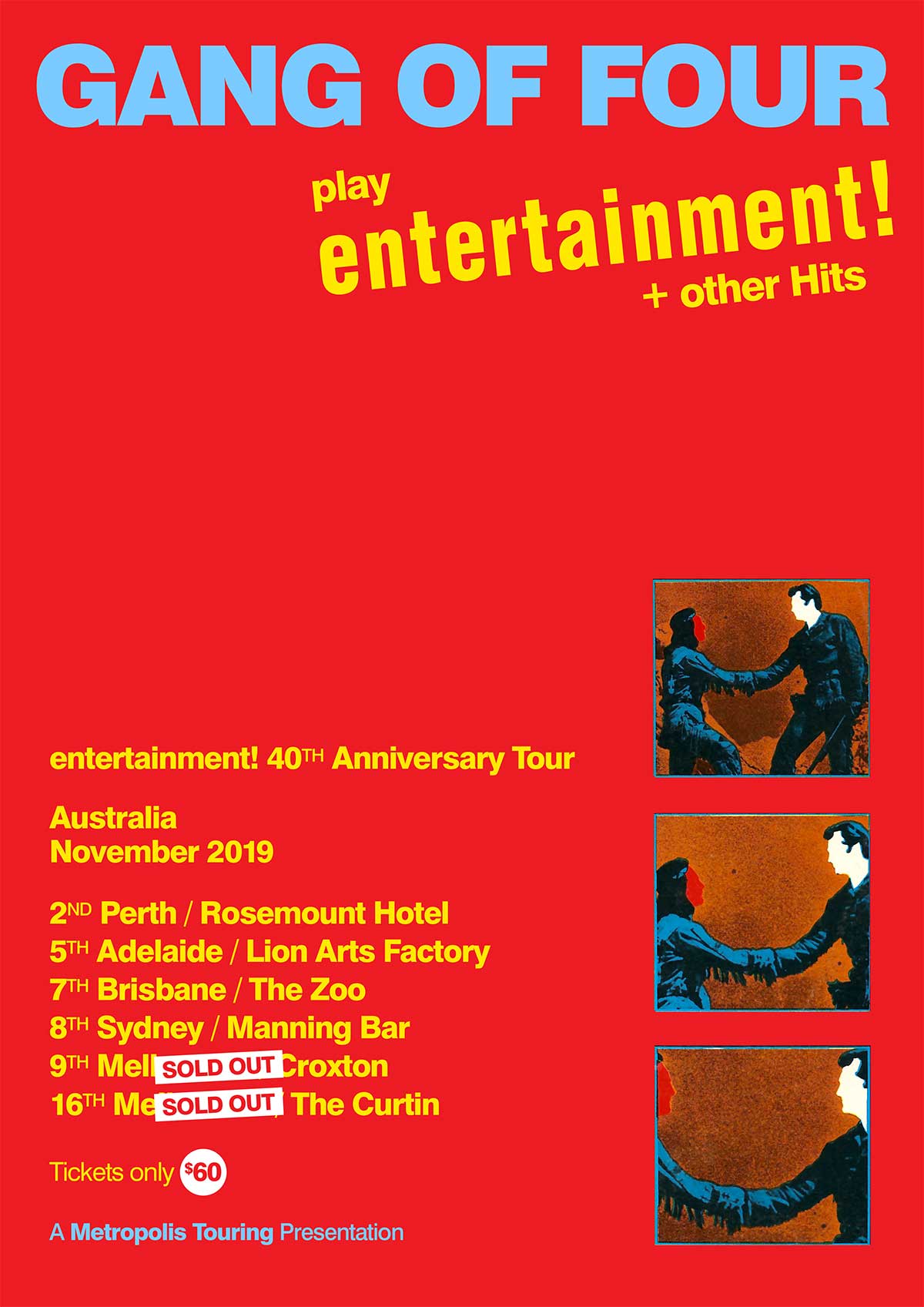 One of the most influential and groundbreaking bands to rise from the British punk scene in the late ’70s was GANG OF FOUR. To Celebrate the 40th Anniversary since the release of their debut album Entertainment! they will play the album in full + other Hits; I Love a Man in Uniform, What We All Want, Paralysed, To Hell With Poverty and more!

GANG OF FOUR’s Entertainment! may have been a sarcastic title, but it wasn’t entirely inaccurate. The album is caustic and bursting with disgust for unethical capitalism, opportunist politicians, and consumer society, among other things, but it’s also crafted with amazing pop sensibility— it is also remarkably danceable. The album was chock full of stone-cold classics Damaged Goods, Naturals Not In It (used during the title sequence of the Marie Antoinette), Not Great Men, Anthrax and Ether. It also featured At Home He’s a Tourist which was banned by the BBC when released as a single due to a lyrical reference to condoms. The band were asked to perform the song on Top of the Pops. However, when the show’s producers heard the line “And the rubbers you hide in your top left pocket” they asked the group to change the word rubbers to rubbish for fear of causing offence. The band refused and the appearance was cancelled…

When they finished the album and played it to their record company, EMI mystified asked “Is this the demo?” to which the band said, “No. It’s the album”. EMI left it as it was and it was put out without any polishing.

As with any boundary breaking record, Entertainment! has subsequently been the source of a continual stream of copies and copies of copies, but even as the imitations continue, GANG OF FOUR’S debut remains singular, a powerful call to arms and out of apathy

Kurt Cobain (listed Entertainment! as 13th on his Top 50 Favourite Albums in his journal.

Michael Hutchence cited GANG OF FOUR as a major influence on INXS (Anthrax was used in Richard Lowenstein’s movie Dogs in Space which featured Michael Hutchence). They were also influential on the likes Fugazi, Bloc Party, Franz Ferdinand. Join GANG OF FOUR as they Celebrate the 40th Anniversary of the album that kick started it all and changed the musical landscape, Entertainment!

'They sound enormous. They have a whiff of danger and revolution about them'

'Entertainment! is a record where germs of influence can be traced through many genres and countless bands'