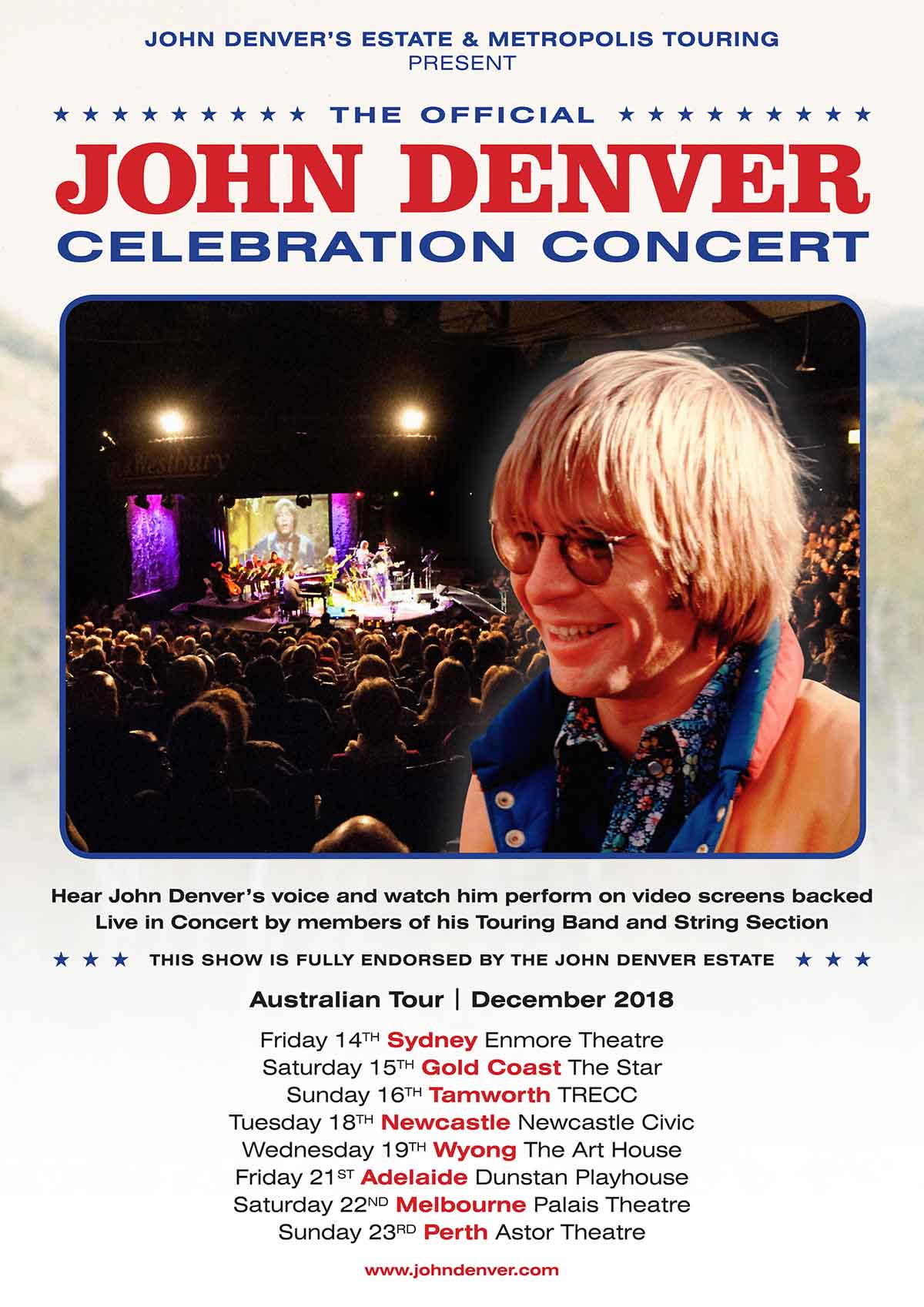 Timeless masterpieces including Take Me Home Country Roads, Rocky Mountain High, Leaving on a Jet Plane, Sunshine On My Shoulders, Annie’s Song, Thank God I’m A Country Boy and more will feature on the night, through stunning visuals and authentic performances.

Hear John Denver’s voice and watch him perform on video screens while being backed live by members of his touring band!

The John Denver Celebration Concert promises to be a night of heart-warming nostalgia. A must-see for John Denver fans!

Further details of the night and the band…

John Denver’s audio and guitar parts are heard via the PA and John sings lead vocals on almost all of the songs. There are some songs where Jim Curry will sing lead vocals also.

Alan Deremo (Bass Guitar) A member of John Denver’s band from 1994 until his passing in 1997. Alan has performed and recorded with Vince Gill, Amy Grant, Glenn Frey, Bo Diddley, the Mamas and the Papas and many more. For much of the last decade, Deremo has toured and recorded with Men at Work singer/guitarist Colin Hay.

Jim Horn (Saxophone & woodwinds) A member of John Denver’s band on and off from 1978 to 1995. Jim’s resume reads like a who’s who of rock n’ roll through the decades. He started with Duane Eddy in the early 1960s and has recorded or toured with all four of The Beatles, The Righteous Bros., The Beach Boys, The Carpenters, Joe Cocker, Elton John, Warren Zevon, Steely Dan, Garth Brooks and many more.

Nate Barnes (Drums, percussion) As drummer for the band Rose Hill Drive, Nate has toured the world headlining shows and opening for acts such as The Who, Van Halen, Aerosmith, Stone Temple Pilots, The Black Crowes and more. He has shared the stage with Pete Townshend (The Who), Warren Haynes, Leslie West (Mountain) and others. Nate has earned a reputation as one of the premier live and studio drummers in the Rocky Mountain area.

Jim Curry (Vocals, guitar) Early in his career Jim’s natural voice resembled that of John Denver. Embracing the similarities, Jim continued to sing and specialize in the songs of John Denver, sharing John’s positive messages of love, humanity and environmental awareness. The untimely death of John Denver in 1997 was a tragedy that was felt the world over. Such a void left John’s ardent fans demanding that his music survive. CBS television responded by producing a made for TV movie: “Take Me Home, the John Denver Story” in which Jim landed an off-camera role singing as the voice of John Denver.

“A wonderful and fitting tribute to a great man. I never got to see John in concert”

“I have been to many Tribute shows before, but never have I been to one that’s shown so much respect, and top quality performers as this one did!”

“One of the most beautiful and respectful tributes I have ever seen, with the live musicians I forgot he was gone and became lost in his voice and seeing him again”

“Gone but not forgotten, and his music lives on”