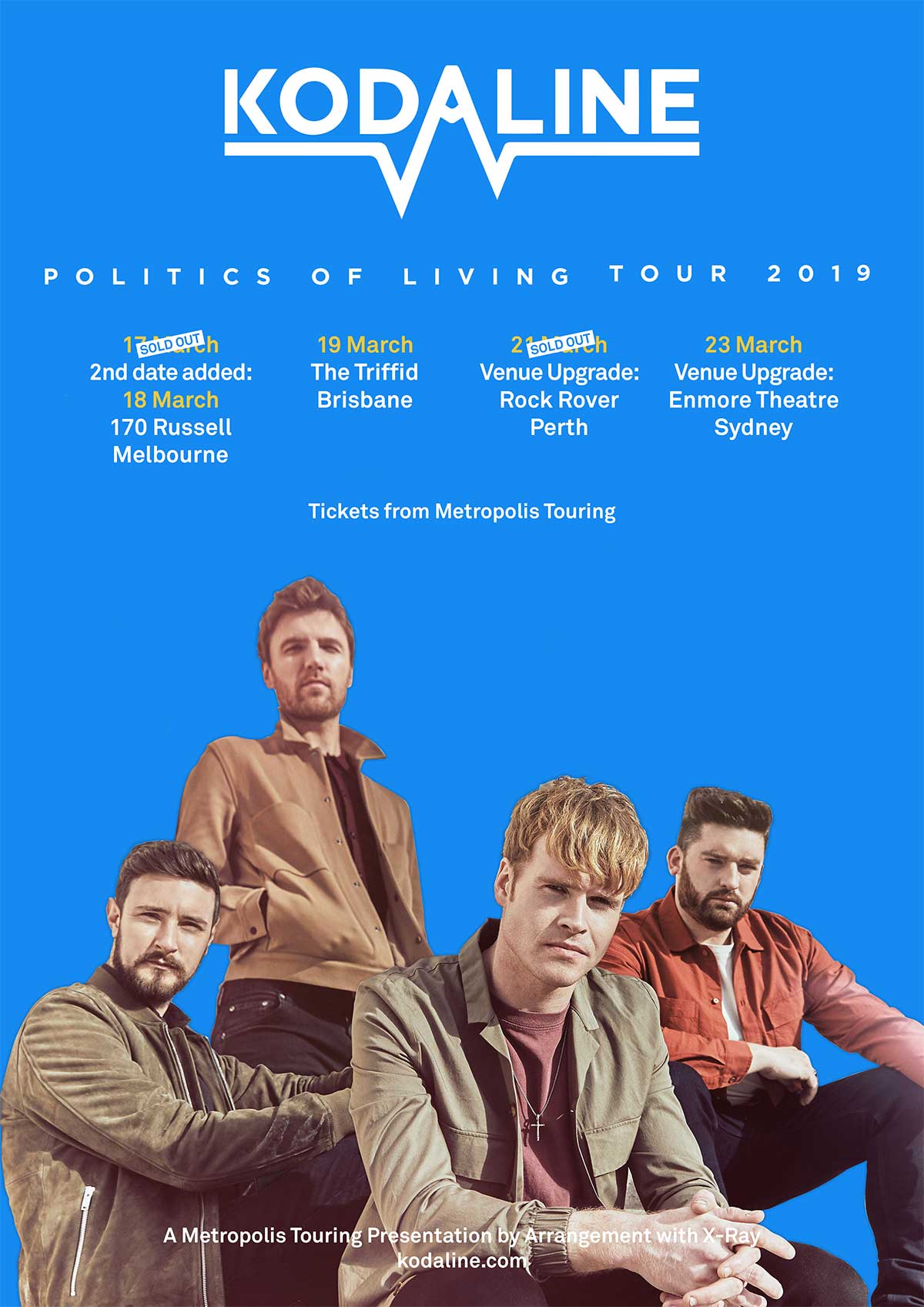 Dublin’s anthemic indie-rockers, KODALINE return for the first time since their Sold Out 2014 Tour

Best described as a sonic hybrid of mainstream American rock fused with British pop, KODALINE possess an inherently lush catalogue of songs, which spans three albums and mix pure energy and emotional meaning together into a romantic blend of power and relatability. KODALINE specialize in soaring, radio-ready guitar rock.

Kodaline released their debut album, ‘In a Perfect World’, in June 2013, which was preceded by the singles High Hopes and Love Like This. The album was a major success in Ireland, going platinum twice, and it it peaked at three and went gold in England KODALINE ‘s second album, ‘Coming Up for Air’, followed in early 2015. The album peaked at number four on the U.K. charts and spawned the singles The One and Honest.

Growing in leaps and bounds since first playing together as 15-year-old teenagers, their newly released third album ‘Politics Of Living’ cements KODALINE’s status as one of the most relevant and uniquely raw bands in the world. With streaming figures well into the 100’s of millions, and their music featured on such television programs as Grey’s Anatomy,Modern Family & So You Think You Can Dance, these shows are sure to delight fans countrywide and build on the already proven hype with their strongest and most thrilling selection of tracks to date.

Possessing a live “show worthy of recommendation to any alternative music fan” – Mancunion. KODALINE will take you on a sonic journey of reflective vulnerability with their proven ability to transcend the confines of the studio and soar to the heights of an arena sized setting. KODALINE’s radiating presence can be felt the moment the lights dim and the authentic connection between band and audience is established – it is everything “a live show is supposed to be” (AMB)

“For all the emotionally driven lyrics, the evening radiated with positivity” (The Up Coming)

Creating the serene blend of emotional relatability, ecstasy and incomparable musicianship, “KODALINE is not the next Coldplay. They are not the next U2. They carved their own path known as KODALINE” (AMB) You’d be crazy to miss out on witnessing the Irish quartet in their most pure, honest and authentic form… live!

"they are about honesty. You can find it within their music, and I found it in their live performance”

"everything a live show is supposed to be”