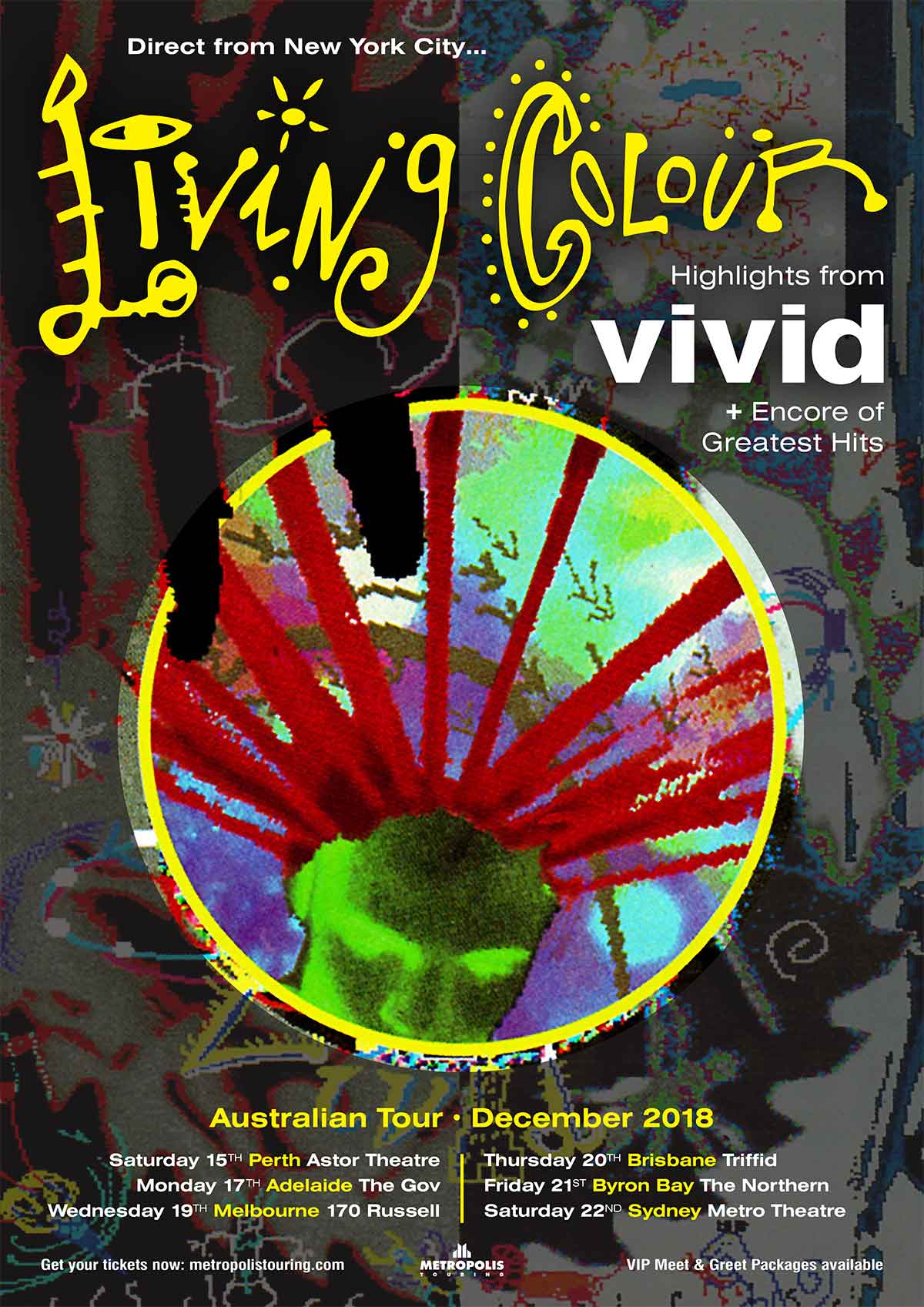 LIVING COLOUR will mark their triumphant return to Australia to perform highlights from their stunning debut album ‘Vivid’ plus they will be armed with all their other classic tunes.

The band’s debut album, ‘Vivid’ was released in 1988 on Epic Records. The album reached #6 on the Billboard 200 Albums chart and was later certified double platinum by the RIAA. It featured Cult of Personality, a #13 hit on the Billboard 200 Singles chart. Cult of Personality went on to earn the band their first Grammy Award for Best Hard Rock Performance. With Cult of Personality‘s thunderous opening riff, followed by a crushing onslaught of drums and bass behind a volcanic Corey Glover vocal, LIVING COLOUR’s breakthrough song kicked in the airwaves during the of 1988 with a fresh, aggressive sound.

After a split in 1995, LIVING COLOUR returned in December 2000 and began recording ‘Collideøscope’ which was released in 2003. ‘The Chair in the Doorway’ followed in 2009. The root of LIVING COLOUR’s next album, came from a performance of Robert Johnson’s Preachin’ Blues at the 100th Anniversary Birthday celebration at the legendary Apollo in New York City called ‘Shade’ is the sound of a band coming to terms with its shadows and light,” says founder Vernon Reid.

Critically acclaimed as ‘’one of the best live bands on the planet’’ LIVING COLOUR are sure as hell going to be on top of their game – delighting the casual concert goers to the seasoned veteran musicians is one thing LIVING COLOUR know how to do.

"left the crowd begging for more"

“Hailed as legends in the rock/metal community, Living Colour were always going to be a treat. But nothing prepares for just how impressive these guys are”

Across The Ocean ‘Soundwave’ Review

“one of the finest hard rock albums of the '80s -- and for that matter, all time”

All Music on ‘Vivid’

“UNBELIEVABLE! Living Colour still rocks as hard as they ever have”

“my mind has again been blown by these guys”