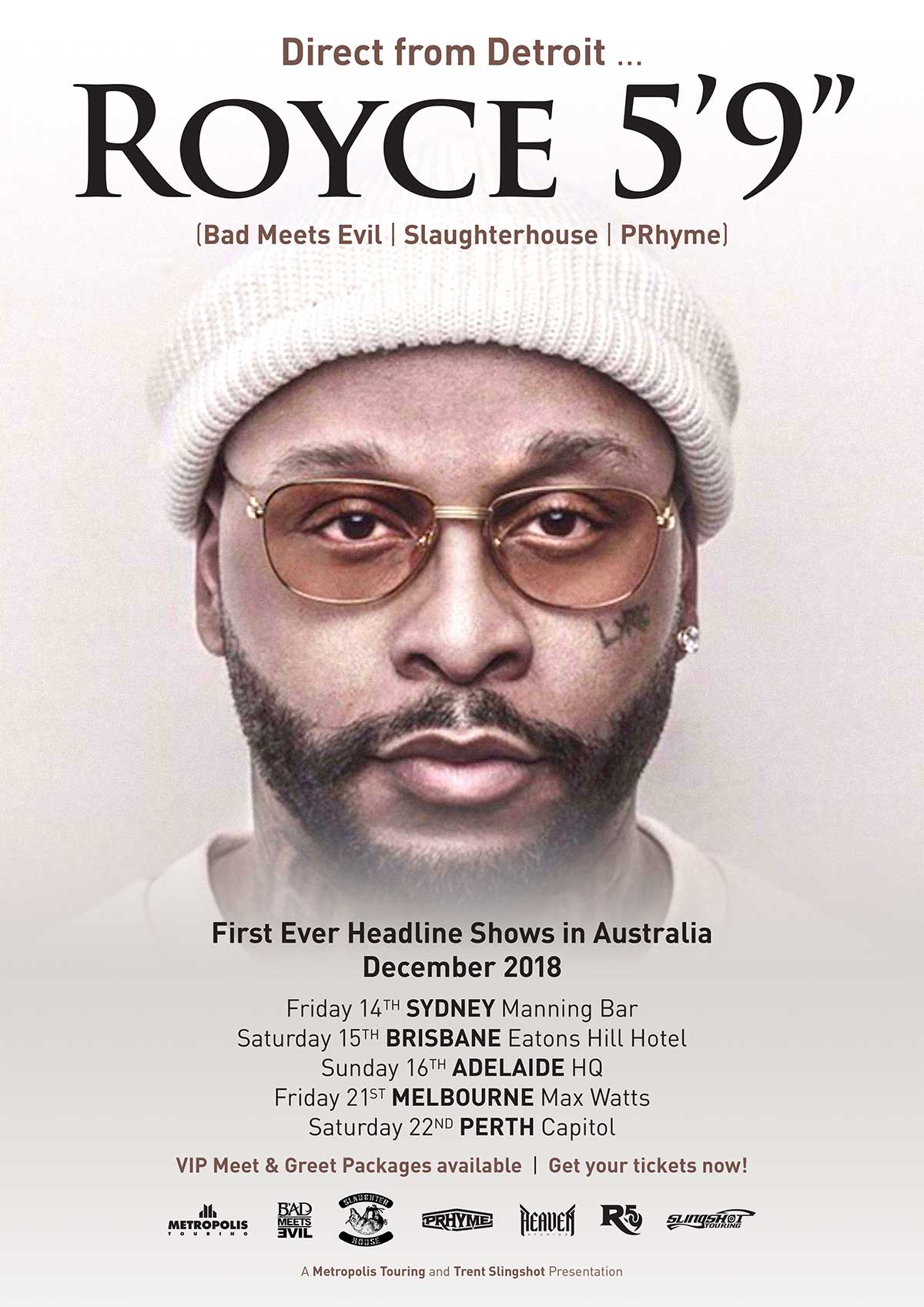 So what’s an acclaimed artist to do when they no longer have anything to prove? In the case of hip-hop’s legendary Detroit lyricist ROYCE DA 5’9” you shut out all of the hype that places you in the same esteemed company as such revered, game-changing emcees as Jay-Z, Ice Cube, Eminem, Scarface, Nas, and Andre 3000 and release your most potent, celebratory and brazenly honest album of your 20-plus-year-career. His recent album Book of Ryan, the 7th solo studio project from the grinding rhyme visionary born Ryan Montgomery, is a work that defies well-worn, grizzled veteran rap clichés. This is the sound of artistic freedom.

No other rapper from Detroit has been as prolific as Royce when it comes to releasing music.  In addition to his solo releases, over the span of his career, Royce has collaborated with long-time friend Eminem as a member of Bad Meets Evil, been a member of the lyrical assassins known as Slaughterhouse and DJ Premier as a member of PRhyme. He was also ranked at an impressive #30 on About.com’s Top 50 MC’s of Our Time.

It was not at all a shock to see an army of kids hanging out with the gregarious Royce at the Montgomery house. Despite his ‘hood surroundings, the hardcore basketball and boxing fan wasn’t into drinking or drugs nor was he involved in illegal pharmaceutical street activities. While he struggled academically in school, he did find solace in his main obsession: hip-hop. “If it wasn’t for Redman, Ras Kass, Jay-Z, Eminem, Dr. Dre, E-40, Too $hort and guys like that I may not have ever fallen in love with the artform. Thirty years later, I still have that same love for hip-hop I did as a kid writing my first rhyme.”

For ROYCE DA 5’9”, it’s all about the journey. “I just want the fans to hear my evolution as an artist as well as me as a man and learn from my mistakes,” he says. “I think they got a little bit of that with Layers, (2016 album which came out in Australia via Golden Era, an imprint label run by Australian rappers Hilltop Hood) but Book of Ryan is me letting it all out. We’ve been taught everything but the right way to do shit. I want to be an example to the younger artists and help out anyway I can.”

‘’Royce proved why he is Top 5 Dead or Alive. Incredible’’

‘’It was my first time seeing Royce perform, and the man nailed damn near every word in every verse he spit’’

’His flow is always great, and lyrically he's one of the best out there’’