Sepultura VIP Meet & Greet Inclusions are;Ticket to the showMeet and Greet with SepulturaPhoto with Sepultura on your own phone or camera2 items signed by SepulturaLimited edition A3 Thick Card PosterOfficial commemorative VIP LaminatePriority Access to the Venue

Death Angel VIP Meet & Greet Inclusions are;Ticket to the showMeet and Greet with Death Angel Photo with Death Angel on your own phone or camera2 items signed by Death Angel Limited edition A3 Thick Card PosterOfficial commemorative VIP LaminatePriority Access to the Venue 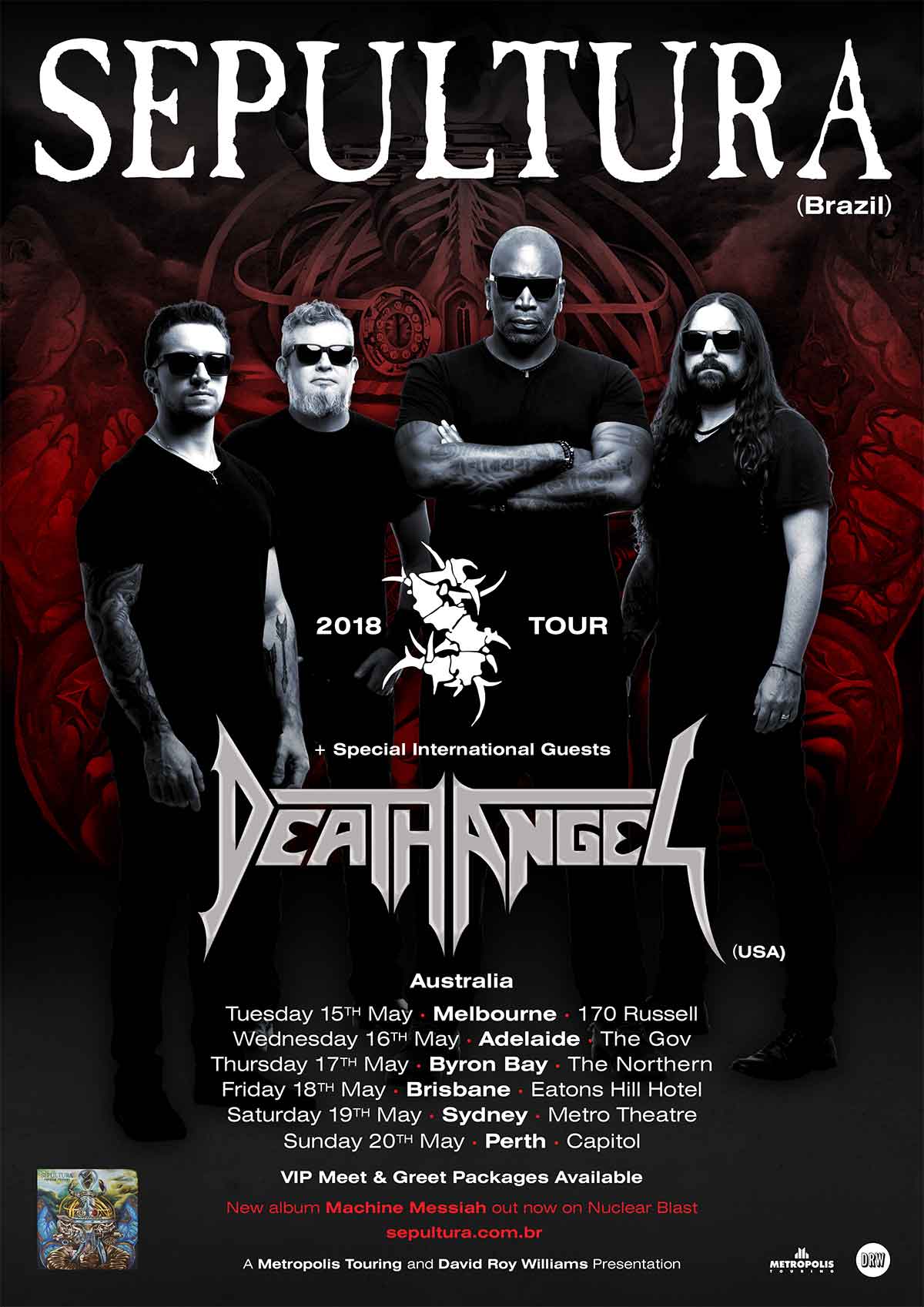 The Sepulnation is alive and well! Following their crushingly successful 2014 New Zealand/ Australian Tour, Brazilian Metal Icons SEPULTURA unleash a heavy metal hurricane upon the Sepulnation in May 2018.

Armed with their finest album in decades ‘Machine Messiah’,SEPULTURA emerge into a troubled world with extraordinary songs guaranteed to lift the spirits of any loyal metalhead. SEPULTURA are legends and are responsible for the existence of several of your favourite thrash metal bands today!

The band’s total command of the stage is cemented in place by blistering live performances that have remained a constant threat to all contemporaries. It’s a forgone conclusion that audiences will to erupt to Roots Bloody Roots, Territory, Refuse/Resist, Arise, Attitude,Ratamahatta and so many more! Just reading those song titles paint a picture of you losing your shit in a circle pit – this is the power of SEPULTURA!

Joining Sepultura in this headlong rush into mayhem are one of the most influential Thrash Metal bands ever – DEATH ANGEL. A peek through a time portal to the Bay Area Scene in the 80s would reveal Metallica’s Cliff Burton at the front of the stage at Ruthie’s Inn banging his head to Death Angel’s inventive style, and speedy, complex arrangements. But who needs HG Wells when you can see the real thing here and now at a venue half an hour from home? Buzzsaw speed riffs, double kick drum bedlam, and scorching vocals are just a few of the elements which define the uncompromising urgency that is DEATH ANGEL. Three decades into their celebrated career, DEATHANGEL remain as hungry as ever.

With the critically acclaimed double barrel blast to the system delivered by SEPULTURA and DEATH ANGEL, metal fans will be electrified with horns in the air euphoria. We kid you not. This is the shit!

‘Sepultura deserve all the respect’

‘Sepultura was tight, taught, energised and clearly stoked to see the room busting at the seams with Seps shirts and bodies pummelling over the barrier’

“immediate moshing, people climbing on and pogoing into each other, and circle pits forming without reprieve. This fast became a mix between a chaotic tribal war-dance, and one big heavy metal party”

'the thunderous drumming and shredding riffs... thrash like a lunatic'