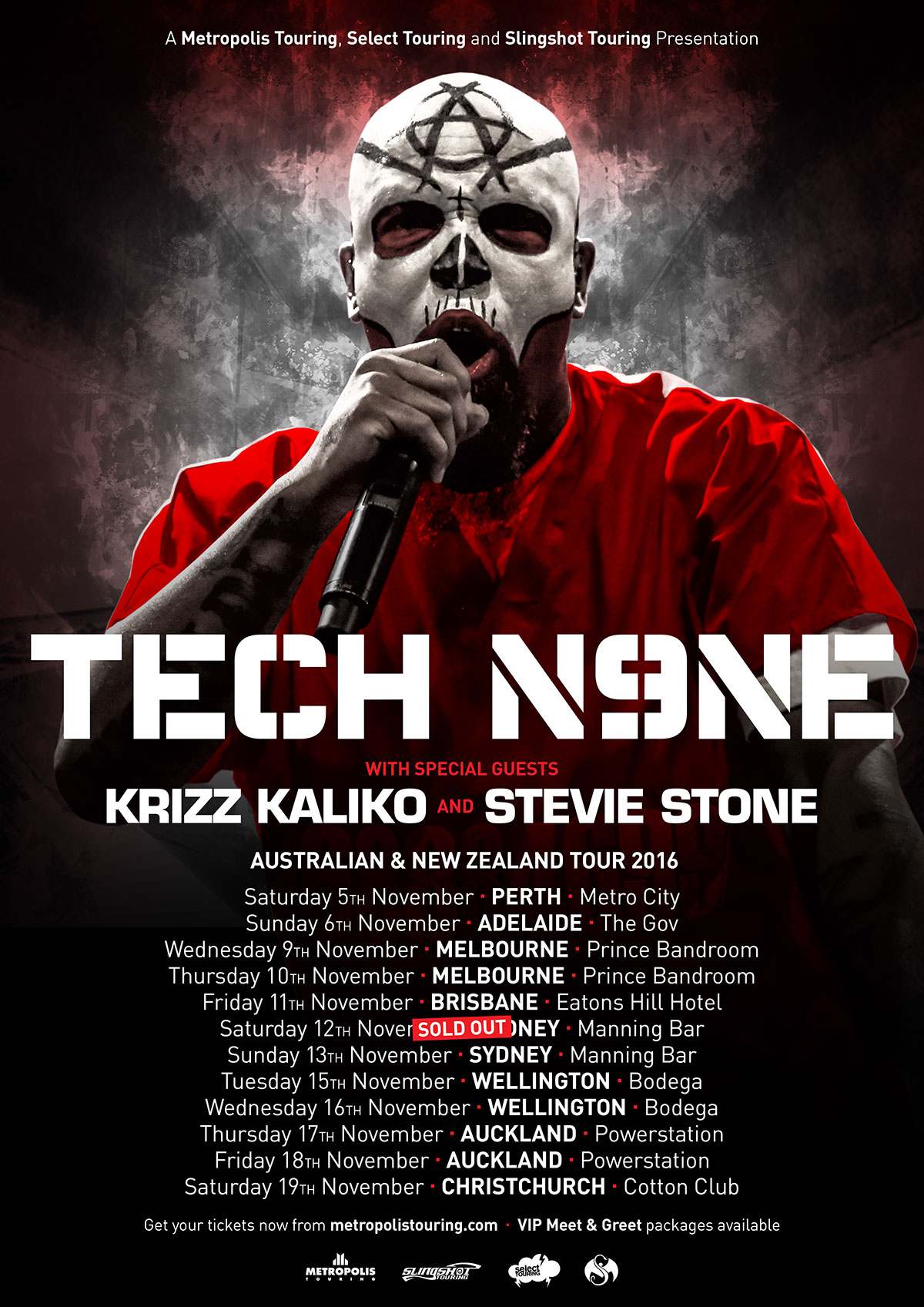 TECH N9NE is the biggest selling Independent Hip-Hop artist of all time. He has had his music featured in film, television, and video games. Independent to the core, TECH N9NE is free to make music for himself and his fans and no one else. He appeases no masters other than the legions of Strange Music fans across the globe.

TECH N9NE became known as an innovative rapper in the 90s because of his trendsetting ability to rap at breakneck speed, to rap backwards and to also deliver riveting personal songs that examined his own inner demons. In the 2000s, TECH N9NE hit the road relentlessly, becoming one of rap’s premier touring acts. With 2012’s “Hostile Takeover 2012 Tour,” TECH N9NE holds the title of headlining the longest continuous tour in rap history.

No one puts on a show like TECH N9NE. His shows are a non-stop party from beginning to end. The atmosphere and energy at a TECH N9NE show is unlike anything else. His rhymes are immaculate, his flow is transcendent and his interaction and dynamic with the crowd is unparalleled. He raps so fast you think his mic will melt. Without mainstream acceptance, TECH N9NE’s commercial success is entirely down to his dedication to his audience, playing at least over 100 shows a year and making sure every show leaves the crowd on a euphoric high and craving more. Seeing TECH N9NE live will make you understand his t-shirt slogan “Strange Music Saved My Life”.

TECH N9NE’s 2016 Australian tour will feature long-time partner in rhyme KRIZZ KALIKO, who will be both performing with TECH N9NE and a feature support set. KRIZZ KALIKO has been working with TECH N9NE since the late 90’s and just put out his latest solo album, “GO” earlier this year. KRIZZ KALIKO’s infectious charisma and dynamic vocal range have made him a fan favourite at TECH N9NE’s live shows for over a decade. In addition to KRIZZ KALIKO, the tour will also feature Strange Music’s STEVIE STONE – this will be his first solo sets in New Zealand.

TECH N9NE sounds as fresh and hungry as he did when he first started more than a decade ago. “I’ve got a chip on my shoulder,” TECH N9NE says. “I’ve still got a lot to prove. That’s why I still rap so hard. I’m always trying to get better and better. I’m not softening it.” If you missed out last time, now is your chance to fix your mistake. If you were lucky enough to catch one of the shows, this is another opportunity to witness one of the greatest live shows in Hip-Hop, period.

His energy on stage can be measured in fictional giga-watts!

The audience absolutely loved it; there was so much energy that night