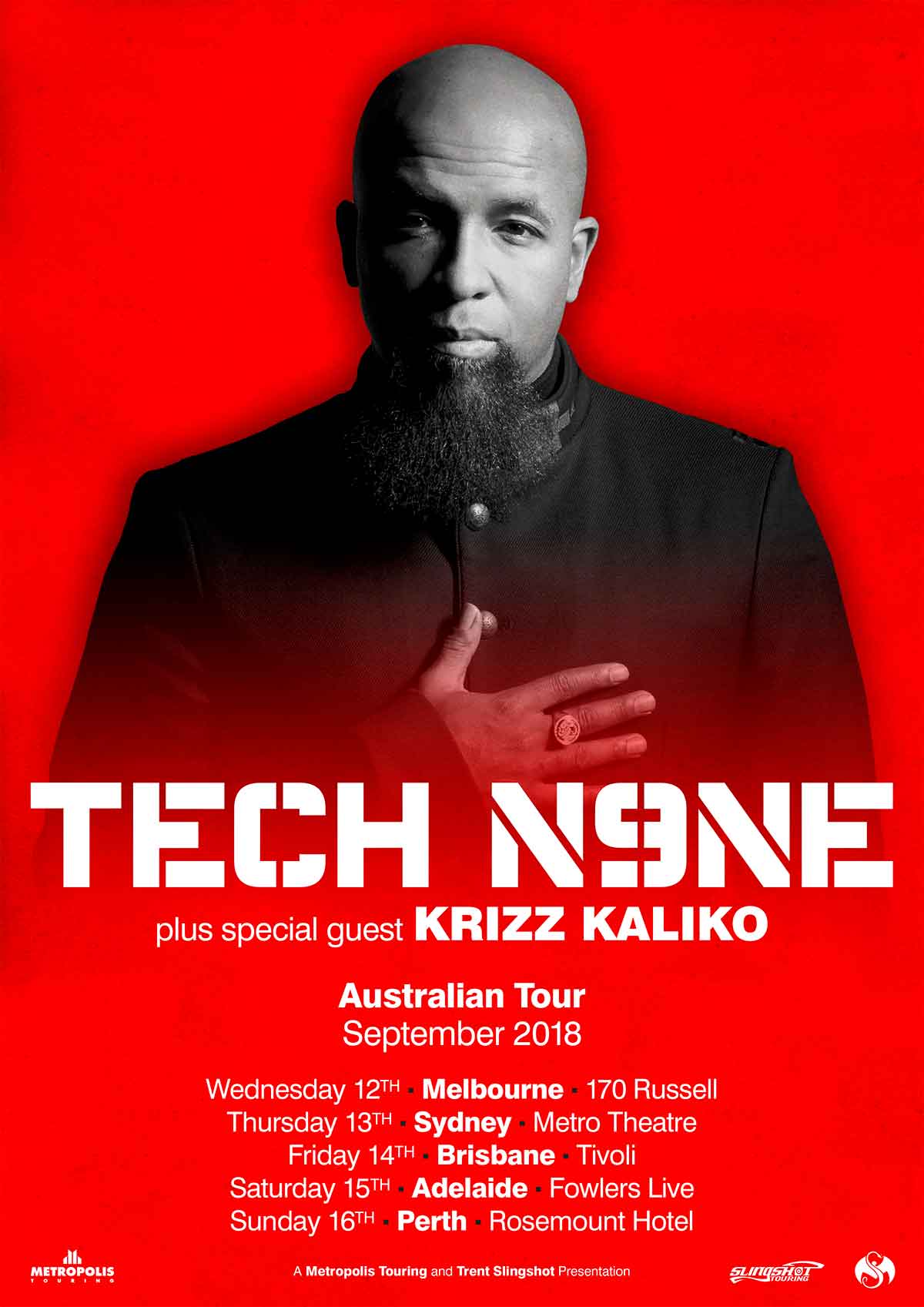 Attention all Techniciansss: Hip-Hop Powerhouse TECH N9NE returns to Australia + New Zealand this September after selling out shows in Sydney, Melbourne and Perth in past tours. The announcement comes with a stern warning for fans: TECH is hungrier than ever before.

TECH N9NE’s live shows are not for the faint of heart. With the crowd hanging onto his every movement, TECH masterfully guides them through the evening of sonic chaos, feeding off the madness unleashing before his very eyes. His shows are a non-stop party from beginning to end. The atmosphere and energy at a TECH N9NE show is unlike anything else. No one puts on a show like TECH N9NE.

TECH returns to our shores holding up high his latest record, 2018’s PLANET. The album is a shining beacon at TECH’s status as an untouchable in the scene, scoring high profile collaborations, including Machine Gun Kelly and Y2 on the mosh anthem NO REASON, while proving his mettle, yet again, on his own as we see with fan-favourite single DON’T NOBODY WANT ONE.

As the biggest selling Independent Hip-Hop artist of all time, TECH N9NE has had his music featured in film, television, and video games. Independent to the core, TECH N9NE is free to make music for himself and his fans and no one else. He appeases no masters other than the legions of Strange Music fans across the globe.

Without mainstream acceptance, TECH N9NE’s commercial success is entirely down to his dedication to his audience, playing at least over 100 shows a year and making sure every show leaves the crowd on a euphoric high and craving more. Seeing TECH N9NE live will make you understand his t-shirt slogan “Strange Music Saved My Life”.

“I’ve got a chip on my shoulder,” TECH N9NE says. “I’ve still got a lot to prove. That’s why I still rap so hard. I’m always trying to get better and better. I’m not softening it.” If you missed out last time, now is your chance to fix your mistake. If you were lucky enough to catch one of the shows, this is another opportunity to witness one of the greatest live shows in Hip-Hop. Bar none.

'One of the most unrelenting, fearless rappers of all time'

‘one of the most unique and intriguing rappers in history’

‘Busting out rhymes so fast it will make your head spin’

‘effortless and natural, many hip-hop heads were left hypnotised by Tech N9ne’

‘Tech N9ne can control the crowd like only a true master can.’