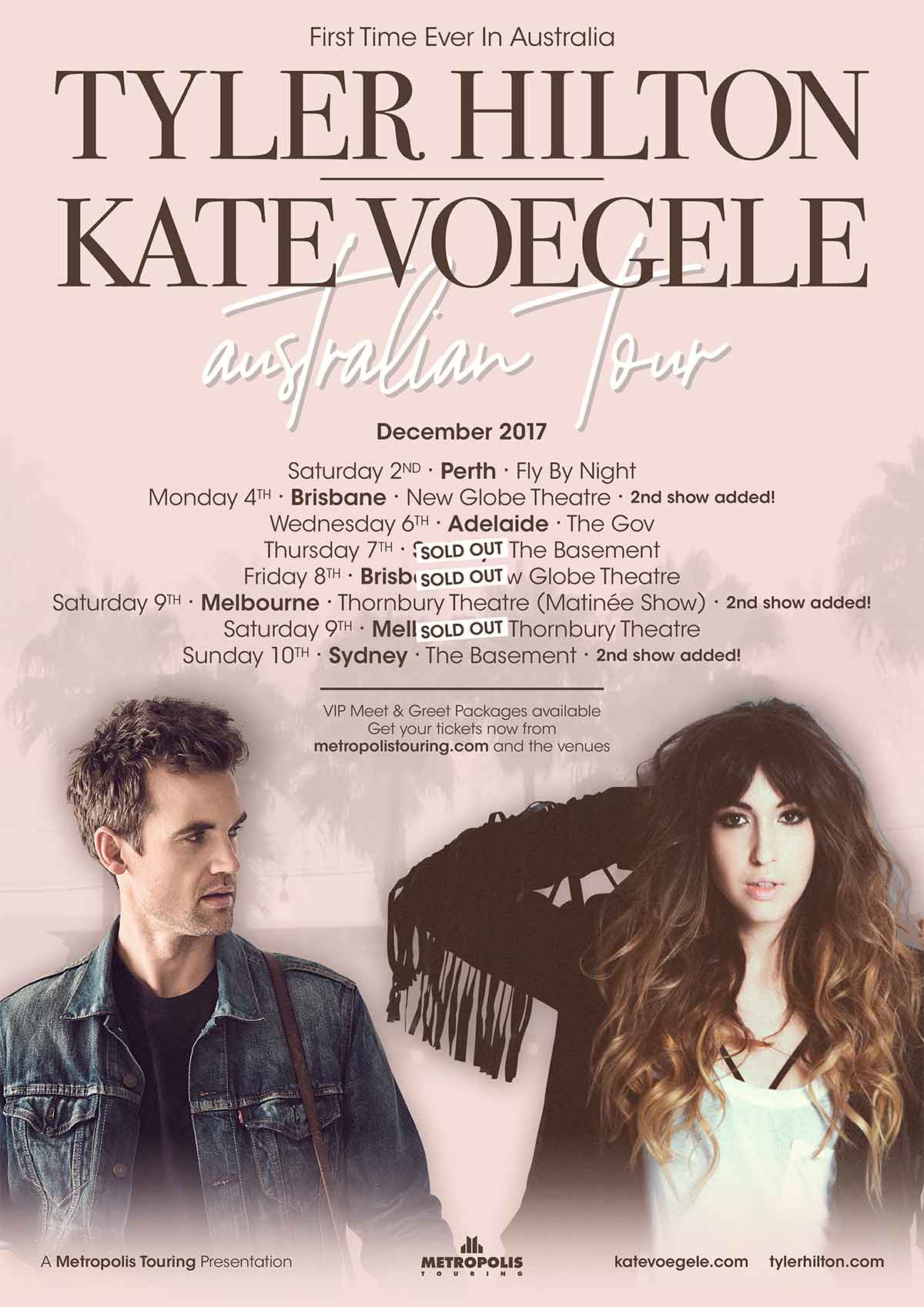 TYLER HILTON (USA) and KATE VOEGELE (USA) perform together live in concert for the first time ever in Australia. After meeting on the set of US hit TV show ‘ONE TREE HILL’ where they played characters Chris Keller and Mia Catalano, both based on their real lives as musicians, the two have been touring around the world together performing to sell-out crowds. This duo is the perfect throw back to your teenage youth to relive the soundtrack to all your past loves.

TYLER HILTON signed his first record contract at 18, and released his debut self-titled EP May 2004. His debut Album ‘The Tracks Of Tyler Hilton’ was released September that same year which saw him tour with Gavin Degraw and Hilary Duff. TYLER HILTON has gone on to release 4 albums, 2 EP’s and was featured on the Grammy Award winning Soundtrack to ‘Walk The Line’. His latest album ‘Indian Summer’ he describes as a ‘hand-crafted coming of age exploration into early manhood, family, and home life’ and has been well received as a fan favourite.

KATE VOEGELE began her music career at only 16 years old, landing support slots with Counting Crows and John Mayer off the back of her first EP ‘The Other Side’. Shortly after she was discovered and signed to MySpace Records by MySpace founder himself Tom Anderson. After landing what she thought was a 2-episode role, it turned into a 4-season stint on One Tree Hillwhere she performed her songs to millions of viewers each week. Life after One Tree Hill has been nonstop touring and writing. KATE VOEGELE’s fourth Album ‘Canyonlands’ was released in October last year.

This amazing singer songwriter duo will perform all their fan favourites including Tyler’s Missing You, Glad, You’ll Ask For Me plus Kate’s rendition of Hallelujah, You Can’t Break A Broken Heart, Wish You Were as well as songs from the ‘One Tree Hill’ soundtrack. A night set to take you back to those nostalgic One Tree Hill feelings of youth, falling in and out of love, don’t miss the unique opportunity to see TYLER HILTON and KATE VOEGELE up close and personal performing all your favourite songs!

‘always entertaining... a great songwriter with a phenomenal voice’

‘A wonderful alternative to the over-produced, over-processed music that dominates the pop charts today’