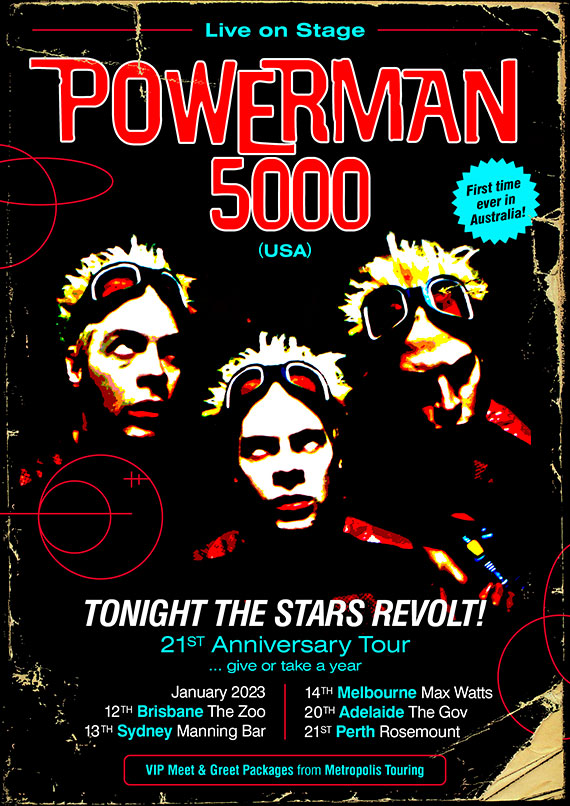 Tonight The Stars Revolt! has sold over 1,000,000 copies. With cyberpunk imagery, catchy riffs, funky beats and rap rock vocals, POWERMAN 5000 bridged the gap between Nu Metal and Industrial Metal and packaged it up in a retro-science fiction b-movie aesthetic that separated them visually and musically from their peers. It was an album that has a timeless appeal that sounds as catchy and fun in 2022 as it did over 2 decades ago.

The uber-talented supervillains of the Heavy Metal scene POWERMAN 5000 bring their trademark high energy fun and good times to Australia to Celebrate the 21st Anniversary of Tonight The Stars Revolt! playing When Worlds Collide, Supernova Goes Pop, Nobody’s Real and more from the album + extra set of Hits – Bombshell, Super Villain, How to be Human

Don’t Miss Out. Get Your Tickets Online.

Spearheaded by the enigmatic Spider One (younger brother of Rob Zombie), Powerman 5000 began in 1991 when Spider dropped out of art school in Boston, Massachusetts, purchased a cheap 4-track home studio and drum machine and recorded a 12” single ‘Much Evil’ with producer Lamar Lowder (Dead Inside the Chrysalis, Bullethead & Jerk).

In 1993, the band released an independent EP titled A Private Little War, which was limited to 500 copies and only sold at shows. In 1994 and 1995, Powerman released two more independent records, True Force and The Blood-Splat Rating System. Both albums were local successes. In 1996, they performed on the second stage of Ozzfest and appeared in an episode of Beverly Hills, 90210, where David and Donna filmed a music video for their song “Strike the Match”.

They released several singles and in 1999 guitarist M.33 (Mike Tempesta) joined the band as they got their biggest break by creating a strange fusion of what they called ‘science fiction and action rock’. They released Tonight the Stars Revolt (produced by Sylvia Massey), which contained the hit singles ‘When Worlds Collide’, ‘Nobody’s Real’, and ‘Supernova Goes Pop’. The album sold over a million copies and became the group’s most successful release.

Rolling Stone reviewed the album receptively saying, “The metal riffs are meted out like knuckle wraps and Spider’s vocals are pushed through a meat grinder as he waxes profane about gods and monsters, global annihilation and man-made machines hungering for destruction.”

With Tonight the Stars Revolt, the band merged cyberpunk imagery, catchy riffs, funky beats and rap rock vocals and bridged the gap between Nu Metal and Industrial Metal and packaged it up in a retro-science fiction b-movie aesthetic that separated them visually and musically from their peers. It was an album that has a timeless appeal that sounds as catchy and fun in 2022 as it did over two decades ago.

In 2001 Poweman 5000 covered the 80s classic ‘Relax’ by Frankie Goes to Hollywood for inclusion on the film soundtrack to Zoolander starring Ben Stiller. It was also reported Limp Bizkit recorded a version but only Powerman 5000’s made the cut on both the film and the soundtrack. Their version was also used on the trailer for Zoolander 2 (2016)

By 2003, after the release of their Transform album (which stayed on the Billboard charts for 9 weeks) everything changed. Dreamworks Records dropped the group. Powerman 5000 was left adrift.

“You suddenly found yourself in an environment of just trying to figure out what to do next,” says Spider of that particular time in the band’s journey. “This was that weird in-between time.”

Undeterred, Spider continued with his own offshoot label, Megatronic Records as well as various and numerous line-up changes in the band. In 2005 new music was released, under Spider’s new label, in the form of a rarities album titled The Good, the Bad and the Ugly Vol 1.

2014’s Top 40 US Billboard single, ‘Sid Vicious in a Dress’ is perhaps fans most recent fave Powerman output with half a million views on Youtube.

“I suppose at its simplest it’s a twisted love song, but really it’s about loving what hurts you, what is bad for you,” states Spider. “Staying when you should run. Over the years, Sid Vicious has become the poster child for chaos and self-destruction. I just took that and put it in the form of a beautiful girl. The title of the song kind of says it all.”

Like his White Zombie older brother Rob Zombie, Spider has a love for horror films, claiming Texas Chainsaw Massacre as the template for what a good horror film should be.

“It has been imitated so many times, but never really duplicated. It had such a raw vibe, you felt like you were watching a documentary; it is like the original found footage!”

This will be Powerman 5000’s first tour of Australia to celebrate the 21st anniversary of their landmark album Tonight The Stars Revolt playing ‘When Worlds Collide’, ‘Supernova Goes Pop’, ‘Nobody’s Real’ and more from the album + extra set of Hits – ‘Bombshell’, ‘Super Villain’, ‘How to be Human.’

This is one tour not to be missed. 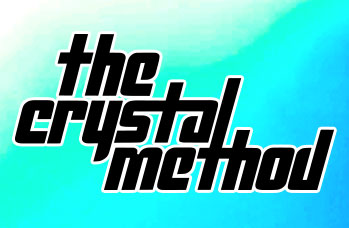 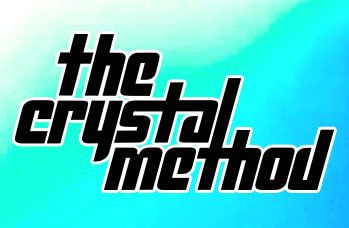