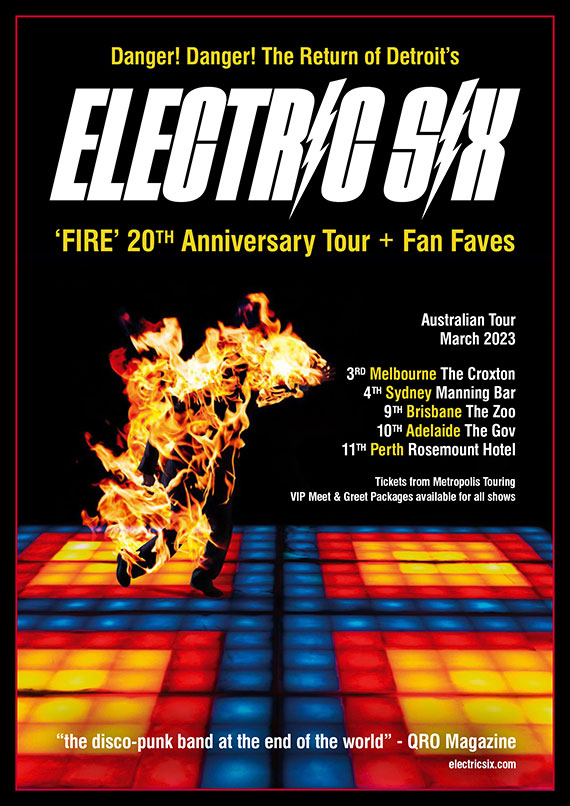 An Electric Six show is a combination of a concert, a theatrical experience, an art exhibit! With such an epic set list includes the classic from ‘Fire’ – Danger! High Voltage, Gay Bar, Dance Commander, Synthesizer + Fan Faves – Down at McDonaldz, Randy’s Hot Tonight, I Buy The Drugs + More

Its been a long wait for Electric Six to return down under. The band were last in Australia and New Zealand in 2005! Electric Six deliver energy and absurdity in equal measure and are “still the best live show around”

They say the only constant…is change.  And they may have a point….because for seventeen years Australia and New Zealand have been constantly deprived of Electric Six.   But that is about to change.

Behold, Electric Six comes to you for the first time since 2005, and is desperate to make up for lost time.  Electric Six has seventeen albums now and negotiates the rock and roll dancefloor Down Under as only this collection of middle aged dance ninjas can.  Last time you saw us we were young idiots, hungry for attention and money.  This time the only thing we hunger for…is you.

We come at you now as tenured rock lords, savvy enough to give you all the hits (Gay Bar, Danger! High Voltage and those other ones) along with choice cuts from our legendary below-the-radar career.  Constantly changing, changing constantly…the only thing you need to do is be there.  You’ve grown up with Electric Six.  Now we’re here, live in the flesh, to send you off to the next chapter of your life.  Don’t change for you….don’t change a fucking thing….for me.