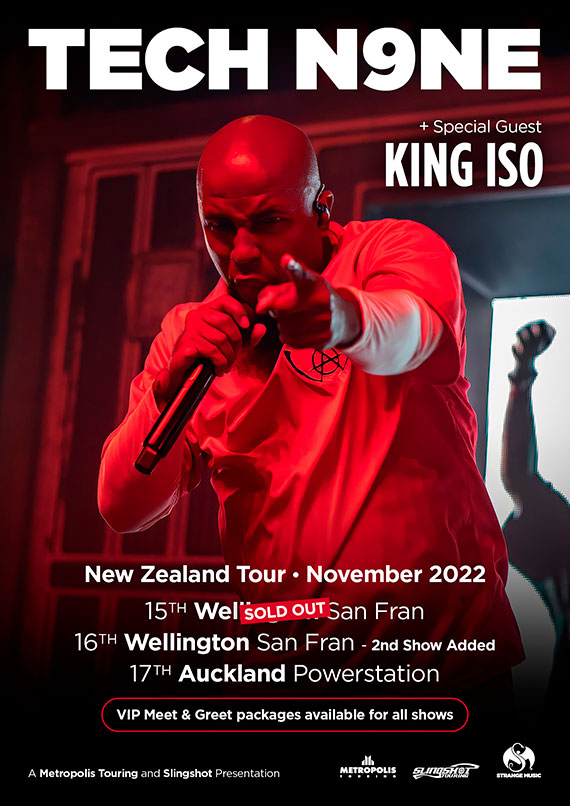 Strange Music Indie Hip-Hop Icon TECH N9NE finally returns to Australia and New Zealand for the first time since 2018 armed with his latest album Asin9ne and a selection of his best known tracks. The announcement comes with a stern warning for fans: TECH is hungrier than ever before.

TECH N9NE’s career is at an all time high with the release of his latest album Asin9ne featuring the track ‘Face Off’ which blew up with an appearance by the legendary Dwayne ‘The Rock’ Johnson alongside King Iso and Joey Cool. ‘Face Off’ has clocked up over 100 million Spotify streams and over 55 million YouTube views.

TECH N9NE’s live shows are not for the faint of heart. With the crowd hanging onto his every movement, TECH masterfully guides them through the evening of sonic chaos, feeding off the madness unleashing before his very eyes. His shows are a non-stop party from beginning to end. The atmosphere and energy at a TECH N9NE show is unlike anything else. No one puts on a show like TECH N9NE.

Special Guest is none other than Rising Rap Phenomenon, King Iso

“he is still very much at the top of his game.. a compulsory must see live act” Ambient Light

“a must see for any hip-hop fan, a dizzying display of stamina and lyricism” 303 Magazine